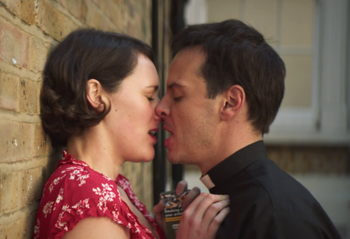 "Oh God, I fancy a priest."
Maya: ...I just wanted to ask what are you doing later, and do you like oatmeal draft lattes? 'Cause I do.
Father Brah: I'm a priest.
Maya: I'm a Capricorn! I think this could work.
— Crazy Ex-Girlfriend
Advertisement:

A romance trope where a character is sexually attracted to or even in love with a member of the clergy (who will almost always be a Sexy Priest or a Naughty Nun to justify the character's affections in the eyes of the audience). May also occur when both partners are members of the clergy (a priest and a nun, for instance).

Truth in Television, and justifiably common when you consider that not all religions demand vows of celibacy. Anglican and Protestant clergy, for example, are free to marry, which was one of the controversial changes in the Reformation. Moreover, married men have always been allowed to become priests (but not bishops) in the Orthodox and Eastern Catholic Churches, although priests are not permitted to get married after ordination (although there are enough loopholes in certain branches of these churches where this prohibition has less weight).

Despite the common misconception, a Vow of Celibacy was not always required in the Roman Catholic Church, either. For its first thousand years it was legal under church law for anyone from a local priest to the pope himself to marry and have children, though how acceptable it was is considered to be varied. It was particularly common for a man seeking to join the priesthood to delay ordination until he got married, since it was usually seen as acceptable for a married man to become a parish priest (as in the Orthodox churches to this day). The practice came to an end when the Church began discovering that priests were bequeathing land to their children that belonged to the Church, not the priest—and, more annoying to the Church hierarchy, trying to bequeath their position as priest (interfering with the authority of the Pope and the bishops to make hiring decisions). Even today, most priests required by their order or diocese to be celibate (to not marry). Extramarital sex is still a sin, certainly, but like any other sin, it can be forgiven through the Sacrament of Reconciliation (aka Confession). This does not, however, shield the priest or the Church from scandal.

Priestly celibacy does, in fact, have a basis in the New Testament. Says St. Paul:

In other words, Catholic priests are celibate primarily so that they can be free to focus on their ministry.

Within the Catholic Church, there are exceptions to the vow of celibacy. Father Dwight Longenecker,

an ordained Anglican priest who converted to Catholicism, is one such exception.

In the Victorian era a clergyman was actually considered top-notch husband material because he had a guaranteed income, social status, and probably wasn't going to spend his time fooling around with the housemaid (hopefully). On the other hand, a curate was at the very bottom of the ecclesiastical ladder, and was generally not nearly as well paid as his superiors.

In fiction, however, this trope will typically be played for drama with Catholic priests or nuns, for an added element of Forbidden Fruit to it. When a work is simply about desire for, say, a Protestant minister, the conflict around this trope tends to be lessened, though there's still plenty of dramatic potential if either or both parties are tempted to carry on a premarital or extramarital affair.

Cases where a celibate clergy member eventually reciprocates the feeling may or may not follow, though whether or not they will abandon their chastity vows, or entire vocation, to be with their beloved varies a lot.

Not related to Get Thee to a Nunnery, though the above trope may have played a part in the latter's origins. People who feel this way will often say "I'm Going to Hell for This."

Compare Nun Too Holy. Disturbingly inverted in the figure of the Pedophile Priest. May violate a Vow of Celibacy.