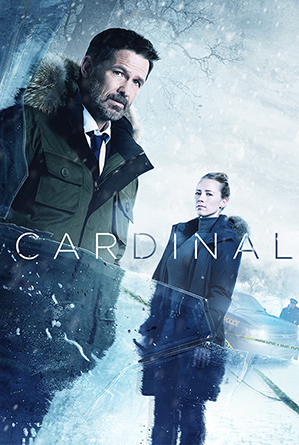 Cardinal is a Canadian Police Procedural drama that premiered in 2017 as a joint-production between CTV (which airs it for the English-speaking audience in Canada) and Super Écran (which airs it for the French-speaking audience). Based on the works of author Giles Blunt, it stars Billy Campbell, Karine Vanasse, Kristen Thomson, Allie MacDonald and David Richmond-Peck.

Originally slated to be a single miniseries, its success led to it being picked up for three additional seasons.

Critics in Canada have hailed the show as an equal counterpart to Nordic Noir thrillers like The Killing.

Set in Algonquin Bay, Ontario, the series follows Detective John Cardinal of the Algonquin Bay Police Department, a deeply burdened and troubled man, as he seeks to unravel complex mysteries and deal with his equally tangled personal life. He and Detective Lise Delorme later take on complex cases in the town. The show has been on the novels Forty Words for Sorrow, Black Fly Season, By the Time You Read This and Crime Machine.

The show has aired four seasons, the last one being in 2020.