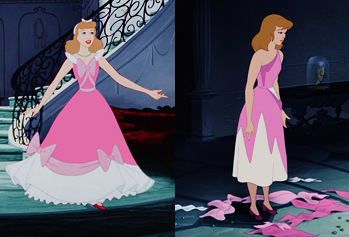 Good thing she has a Fairy Godmother as a backup.
"Wow-ie, do I look sharp! Just in time for tonight's big dance. But I'd better be careful not to get anything on my expensive new tux."
— Chuck, Chuck's New Tux
Advertisement:

So you just bought some new clothes. It's a nice day, why not put 'em on and go for a walk? So there you are, ambling along, maybe even whistling.

This won't end well. You will trip into a puddle, get caught by a splash of mud from a passing car, get soaked by a sudden downpour or the like. In extreme circumstances you will suddenly be passed by a hero chasing a villain and accidentally knocked into a pond or covered with rubble. Extra points if the dress was a Pimped-Out Dress.

And shoes? Well as Ben Elton once said, "Nothing opens a dog's bottom quite like the sight of a new pair of hand-stitched Guccis!"

Clothing Damage is a more extreme version, as is Naked Freak-Out (which is more titillating than either). See also Wardrobe Wound, Watch the Paint Job, Tempting Fate, The Precious, Precious Car, Priceless Ming Vase, Ill-Fated Flowerbed and Forced into Their Sunday Best. Contrast Bulletproof Fashion Plate, where fine clothing seems impervious to damage, no matter what happens to the wearer. May be caused by a fashion-specialized Status Quo Is God to preserve the Limited Wardrobe, along with the Law of Conservation of Detail—they're not going to call attention to new clothes and then do nothing with that information.

Interestingly enough happens quite often when villains are out shopping.

When training with Smokey and the old racers at night, the electronic suit that Lightning McQueen wore for most of the movie comes undone and rips to shreds, returning him to his natural paint job

When training with Smokey and the old racers at night, the electronic suit that Lightning McQueen wore for most of the movie comes undone and rips to shreds, returning him to his natural paint job