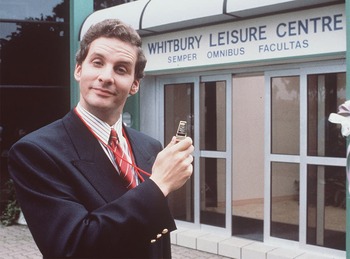 Gordon Brittas and his "empire".
Advertisement:

A Brit Com starring Chris Barrie running seven series between 1991 and 1997. It was created by Andrew Norriss and Richard Fegen (previously known for producing Chance in a Million), and written by them for the first five series, after which they departed and a new team of writers took over. note The commonly accepted sequence of events is that Series 5 was planned to be the last, but owing to its popularity the BBC recommissioned it anyway, and when the creators turned them down the BBC hired the new writers. The Brittas Empire is a slightly surrealist look at proud English leisure centre manager Gordon Brittas (Barrie), and his utter failure to manage the fictional Whitbury New Town Leisure Centre. Brittas is an obsessive bureaucrat and a stickler for rules and procedures, no matter what the situation, resulting in catastrophes on a regular basis. According to his wife Helen (Pippa Haywood), he thinks he's the oil that keeps everything running, but he is in fact the grit in the engine. He is a talentless, tactless and hopeless case of the Pointy-Haired Boss.

Chris Barrie landed the leading role on the show during the various multi-year hiatuses between series on Red Dwarf and ultimately took a hiatus from Red Dwarf when the latter show's shooting schedule conflicted with that of The Brittas Empire, though he made a couple of appearances and returned to the series as a regular when The Brittas Empire finished.

After the end of the show, a short miniseries (Get Fit with Brittas) was aired in 1997, which aimed to educate the public on physical health and exercise.

"Welcome to Whitbury New Town Tropes Centre, how may I help yooou?" (With a smile):

Brittas tries to get a photo taken of him and Laura, but his attempts to move her lead to quite a strange photo.

Brittas tries to get a photo taken of him and Laura, but his attempts to move her lead to quite a strange photo.