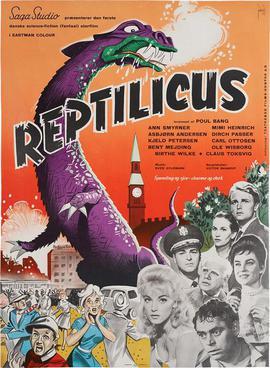 Reptilicus is a 1961 Danish Kaiju movie, in the vein of Godzilla, notable for being the first and only of its kind. A Danish-American co-production, an English-speaking version was filmed simultaneously with the Danish one, which led to the frequent misunderstanding that the two versions are the same except for language, but in practice there are quite a few differences between the two versions, as the two projects each had their own separate director attached (Poul Bang for the Danish version, and script co-writer Sidney W. Pink for the American version) and a couple of differences in cast. Notably, the American version also went through a somewhat heavier post-production and editing process than its Danish counterpart, due to demands from studio executives, resulting in it first getting released in 1962.

A section of a giant reptile's tail is found by a Danish mining company in the frozen grounds in Lapland. The section is flown to the Danish Aquarium in Copenhagen, where it is preserved in a cold room for scientific study. But due to careless mishandling, the room is left open and the section begins to thaw, only for scientists to find that it is starting to regenerate. Eventually having grown back to its full size, the monster goes on an unstoppable rampage from the Danish countryside to the panic-stricken streets of Copenhagen.

Had a short-lived adaptation from Charlton Comics, but because they bought the film rights from the American distributor and not the Danish creators, they had to drop the title after issue 2. The story continued, however as Reptisaurus.

Long considered a Cult Classic by kaiju fans, especially in its home country. The film would gain notoriety again in 2017 when it was featured in the first episode of Netflix's revival of the popular movie-riffing series Mystery Science Theater 3000. For tropes in that episode, see here.