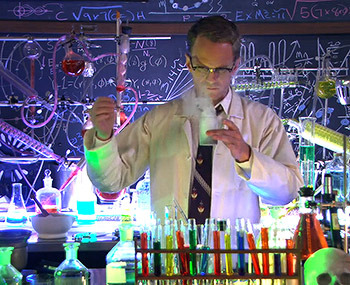 When the subject of a TV show includes the use of deadly toxins, radioactive materials, or biological or chemical agents, you can almost be sure Special Effects artists will make them look a lot more interesting than they are in real life. This is because the vast majority of chemical compounds are colorless, odorless, tasteless and could easily be substituted with a glass of water or a spoonful of salt. Since that doesn't look exciting or menacing, they tend to get totally unrealistic spruce-ups.

Radioactive elements tend to have a Sickly Green Glow, despite the fact that only radium paint does this in Real Life. And even then, it's the zinc sulfide in the paint reacting to high-energy alpha radiation that causes the pale green glow, not the radioactive element itself. Pure radium is an ordinary-looking silvery metal. Since radium paint was once used to make glow-in-the-dark watch faces and instrument gauges before the health risks became known, "radioactive = glowing green" has stuck in the public mind.

For that matter, acid is almost always depicted green and frequently boiling too. While it's true that acid solutions in the real world can vary widely in color from green to red to everything in-between, the acids most often used for modern industrial purposes (sulfuric and hydrochloric) are colorless and clear. Furthermore, boiling them would not be a tremendously useful or wise thing to do. Incidentally, skin contact with most industrial acids will cause a potentially serious and painful chemical burn; but it won't dissolve someone instantly to the bone.

Note, however, that there are several kinds of Deadly Gas in Real Life that are colorful — most notably, fluorine (yellow), chlorine (green), and bromine (red-brown), though bromine is a liquid at room temperature.

Electricity, too, is more colorful and dramatic than in the real world, even more so in animation. Anything electrically charged, such as an electric fence, is more likely than not to light up the surrounding area with crawling arcs of jagged blue fire accompanied by a sizzling noise, even though in the real world such a display requires a charge of tens of thousands of volts and a separation from an electrical ground that is within rather narrow limits. If a person on TV is being electrically shocked, there will almost always be an extremely impressive display of buzzing and crackling arcs of flickering blue fire and perhaps even a display of X-Ray Sparks.

While mains electricity at 100-250 volts is more than capable of killing a human being in the right circumstances, it isn't nearly enough for impressive displays of St. Elmo's Fire.

The center of a nuclear reactor does glow, but it certainly doesn't pulse up and down, and again it's not green. The glow is called Cherenkov Radiation

and it's a pleasing steady blue color. Of course, it's only safe to view that blue glow through water, at the bottom of a "swimming pool" reactor, if you see it in air, and not on the other side of thick leaded glass, then to quote Winchell Chung

, "...the good news is you can probably live long enough write your last will and testament. If you write very quickly."

Dropping a chunk of dry ice into a beaker of water will cause it to appear to boil and give off a ghostly white fog; this isn't all that useful (sometimes small pellets of dry ice are used this way in order to exclude air from a container briefly), but it is a staple of the Mad Scientist Laboratory. If you add a bit of universal indicator to the water, adding the dry ice will make it turn red and start smoking.

Oddly, the one color you don't often see, but is actually common in laboratories, is hot pink. Phenolphthalein turns bright pink in a basic solution, and is frequently used in acid-base titrations. It will also go red in very strongly acidic solutions, though this is seldom used for anything in a laboratory.

"), glass pipes full of glowing energy, and meaningless screens displaying bright symbols. Modern technology, especially things that need to be covert, don't usually have these; with the exception of MP3 players.

However, if you go into a lab that works with transition metals, it will be very colorful. It's one of their noted properties.

Gratuitous Laboratory Flasks are the standard container for Technicolor Science in its liquid form; expect to see plenty of examples of the Labcoat of Science and Medicine there as well. See also Technicolor Toxin and Science Cocktail.