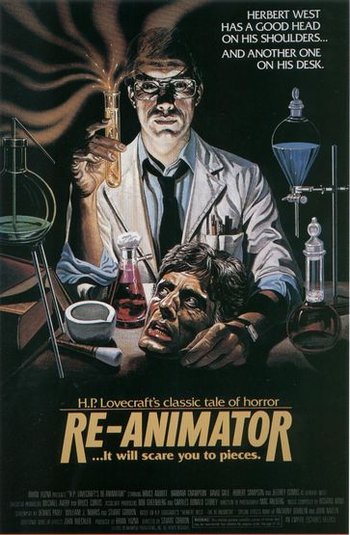 "I must say, Dr. Hill, I'm VERY disappointed in you. You steal the secret of life and death, and here you are trysting with a bubble-headed coed. You're not even a second-rate scientist!"
— Herbert West
Advertisement:

A 1985 Sci-Fi Horror Comedy film directed and co-written by Stuart Gordon, starring the inimitable Jeffrey Combs, and based on the short serial Herbert West–Reanimator by H. P. Lovecraft.

The story involves an idealistic medical student named Dan Cain (Bruce Abbott), a student at the Miskatonic University of Medicine in Arkham, Massachusetts. Dan rents a room to Herbert West (Combs), who has discovered a way to revive the dead, and reluctantly becomes West's assistant. Soon their activities cause a rift between Dan and his girlfriend Meg Halsey (Barbara Crampton), daughter of the university's dean, and draw down the wrath of university higher-up Dr. Hill (David Gale). Then West decapitates Hill. Then he revives him. And then things get crazy.

Re-Animator is remembered for its dark humor, gruesome gore effects, transgressive sexuality, and violence against an undead cat. Less well-remembered, but more poignant, is the sweet, wholesome quality of the relationship between Dan and Meg. Others gravitate to the Homoerotic Subtext between Herbert and Dan. Basically, there's something for everyone.

Re-Animator was not the first film adaptation of Lovecraft; there were waves of them in the mid-1960s (The Haunted Palace by Roger Corman, and Die, Monster, Die! by frequent Corman collaborator Dan Haller) and the early 1970s (The Dunwich Horror — Haller again — and several episodes of Night Gallery). But Gordon's film is probably the most famous such adaptation. It spawned a wave of imitators and Spiritual Successors including From Beyond, Lurking Fear, and Castle Freak (1995) (all starring Combs, with From Beyond and Castle Freak also being directed by Gordon and co-starring Crampton) and 2001's Dagon (directed by Gordon).

Naturally also spawned official sequels: First was Bride of Re-Animator (1990), directed by Brian Yuzna (a frequent collaborator of Stuart Gordon who was a producer on the first film) and Beyond Re-Animator (2003), also directed by Yuzna.

Besides the films, there are several other adaptations. Re-Animator has had crossover comic books with Hack/Slash and Army of Darkness. There is also a critically acclaimed musical