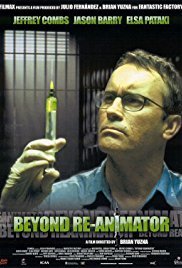 The second sequel to Re-Animator from the year 2003, which was directed by Brian Yuzna.

Herbert West (Jeffrey Combs) has been in prison for thirteen years after one of his test subjects killed a teenaged girl and Dan Cain testified against him. The prison has a new doctor, Howard Phillips, who has West help him in the infirmary. Howard is revealed to be the younger brother of the girl who was killed by West's test subject. He helps West continue his experiments in the hope that what happened to his sister will never happen to anyone else again. West experiments with nanoplasmic energy, which can be taken from a living person and put into a reanimated person, restoring rational behavior. It works. Sort of.

Beyond has examples of: