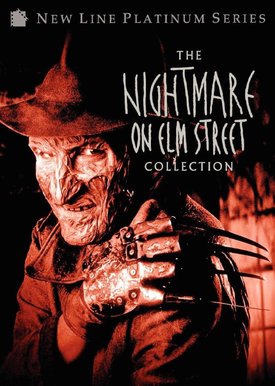 "One, two, Freddy's coming for you"... again, and again, and again...
"If you continue with the villain as the center of the story, which is certainly the Nightmare paradigm, you simply have to introduce a new set of victims every time. And after a while that becomes quite repetitive when you have no real story continuity except the villain. So then you sort of have to continue to concoct things like Freddy's youth or Freddy's this or that...but I think it gets stretched thinner and thinner."
— Wes Craven, discussing the potential pitfalls of this trope.
Advertisement:

A franchise linked by a recurring villain. The heroes and the locations may change or be dropped, but the central link remains the villain. The villain is frequently the Big Bad of the franchise and most or all of its installments, though this doesn't have to be the case to qualify for the trope.

This is not the same as a franchise with a Villain Protagonist, which may introduce a whole new set of heroes with each installment, but usually keeps the villain as the protagonist.

This trope is very popular with the Slasher Movie genre, probably because the heroes can die off in the end without ruining the series. Often though, the villain will appear to die at the end, to allow closure to the series if another one is not made. The End... Or Is It? ending optional. Naturally, Joker Immunity is in full force. There are a few iconic horror heroes, like Dr. Van Helsing, but they're usually a lot less prominent and iconic than their respective villains. Ash Williams may be the only real exception.

The trope's idea started with Pulp novels and villains like Fu Manchu or Fantômas.

If the franchise is named after the villain, do not confuse this with Antagonist Title. If the villain themselves appears as a mascot, they are a Mascot Villain. While the recurring villain in a Villain-Based Franchise usually features as the Villain Antagonist in the individual installments rather than as an outright Villain Protagonist, they are still the overarching main character in the series as a whole, disqualifying them from this trope.