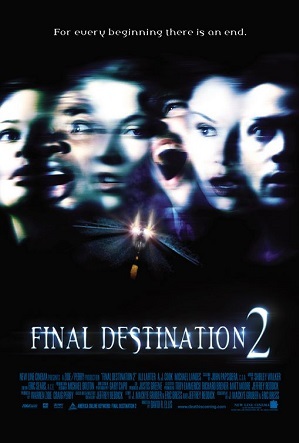 "Look I know this sounds crazy, but you guys all heard about Flight 180 right? The kid who got off the plane? What happened a year ago today?...my premonition was just like his."
— Kimberly
Advertisement:

A year after the Flight 180 explosion, Kimberly and her friends are on spring break when she receives a premonition of a massive car pile-up on the highway which kills them all. She manages to avert the fates of several people, but once again Death returns to hunt them down.

"Only new life can defeat Death."