Film / The Return of the Living Dead 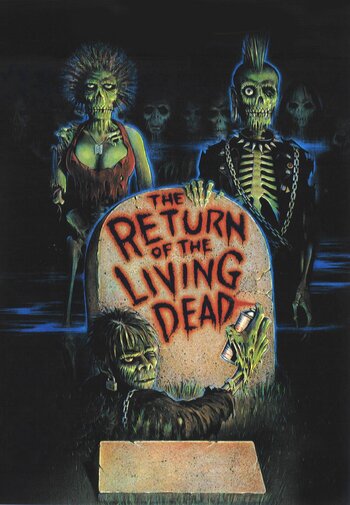 They're back from the grave and ready to party!
"Send... more... paramedics."
Advertisement:

Return is based on the premise that Night of the Living Dead was based on actual events; it seems that in the '60s a chemical called 2-4-5 Trioxin, developed for use as an herbicide in destroying marijuana plants, was accidentally released into a basement morgue of a VA hospital in Pittsburgh, causing the cadavers stored there to reanimate. Unable to contain the undead threat, the military placed the lively corpses inside sealed barrels. Then, to guard against the story leaking out, the government permitted Night of the Living Dead to be made, thus covering up the real incident with a fictional one.

However, due to a clerical error, a few such Barrels of Doom were shipped to a Louisville, Kentucky medical supply warehouse currently employing our intrepid heroes, and stored there for years. As a testament to the strength and quality of the barrels, one of them springs a leak as soon as the foreman reassures his new employee of the solid military construction by slapping its side. The Trioxin gets into the cadaver freezer, animating the contents. The shambling, hungry dead escape, craving their favorite food: brains...

Not to be confused with the 1978 novel Return of the Living Dead, which was a direct sequel to Night of the Living Dead written by that film's co-writer John Russo (who, confusingly, also wrote a novelization of this film).