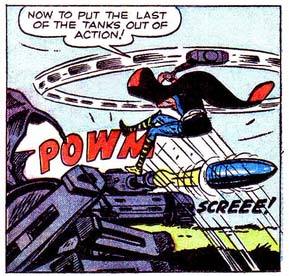 Whenever an object is falling from the sky towards a character, it is often accompanied by a high pitched whistling tone that both increases in volume and decreases in pitch as the object approaches the ground. It is usually heard while a Shadow of Impending Doom engulfs said character. May be accompanied by a Stuka Scream or a dust cloud.

Usually, though not always, an example of artistic license, as in Real Life, the pitch of the whistling noise would increase rather than decrease as the object accelerated towards the ground, due to the Doppler effect. Possibly justified in that those who have heard a bomb whistle and lived to tell about it were usually in a position (such as the plane) moving away from it.

Please remember that if you should ever find yourself in an area often bombarded from the sky, that not all projectiles make such a sound. If you are informed that something deadly may land nearby, you should duck or take cover, even if you don't hear the whistle.

Examples without the Shadow of Impending Doom

Bender signals his crew to catapult a boulder towards Robot 1-X, which are accompanied by bomb whistles. REALLY LONG bomb whistles.

Bender signals his crew to catapult a boulder towards Robot 1-X, which are accompanied by bomb whistles. REALLY LONG bomb whistles.