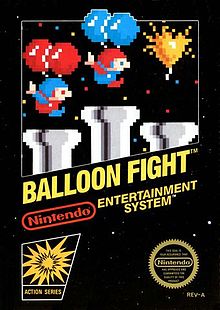 A 1984 video game by Nintendo for the Nintendo Entertainment System. Similar in practice to the earlier title Joust, play assumes in either one player or competitive (or co-operative by agreement) two-player.
Advertisement:

Players control a "Balloon Man," a funny little man who wears a blue shirt and red overalls not unlike Mario at the time, who has two red balloons tied to him. Pressing either of the buttons makes the Balloon Man flap his arms and gain altitude. Bird-like enemies inhabit each stage, which fly around with their own balloons, trying to pop the Balloon Man's, who in turn is trying to pop theirs. When one of the balloons is gone, the Balloon Man's flotation decreases, making it harder for him to stay airborne. When both are popped, it's a life lost. When the Balloon Man pops an enemy's balloon, the enemy will deploy a parachute and float to the nearest surface, where they begin inflating a new balloon. The Balloon Man can then run into them to kill them permanently, or hit them as they float down. If either the Balloon Fighter or an enemy gets too close to the water in each stage, a giant fish will leap up to grab them. Other obstacles include lightning, which is instant death, and Flippers, which bounce whoever touches them straight down or up. In the two-player mode, it is largely a competition for points, but the players can decide to work together. Accidents happen though. Every three rounds, there is a bonus game where the player(s) try to grab all 20 balloons coming out of pipes in the ground.

The third mode is "Balloon Trip," a single player maneuvers the Balloon Man through an Auto-Scrolling Level inhabited by electrical sparks, which cause death, and balloons, which give points. With only one life, the player tries to get a high score.

The game had one pseudo-sequel, Balloon Kid for the Game Boy, as well as a Dolled-Up Installment in the Japan-exclusive Tingle's Balloon Fight. Balloon Fight is a popular go-to title in some of Nintendo's self-referential games. References pop up everywhere from Tetris DS, and Pictobits, to WarioWare, and Super Smash Bros.. It is featured as one of the twelve attractions in Nintendo Land. It's also a fairly common game for Nintendo to re-release. It was made available on the Game Boy Advance e-Reader, on GameCube in Animal Crossing as well as being present on the Wii Virtual Console, given away for free as a 3DS Ambassador Game, and was the first game on sale in a special campaign leading to the official launch of the Wii U Virtual Console. The Balloon Men show up with their own challenges in NES Remix.

Tropes present in Balloon Fight include: