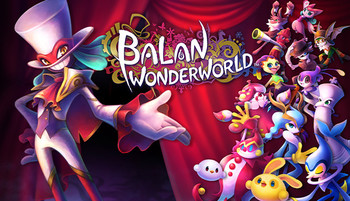 Every Moment Is an Adventure.
Oh? Why, hello there.
And welcome!
Here, child. Have this.
And tell me: what is it you miss?
But, of course — it's a piece of your heart!
Which means it's time for the show to start!
Now, let us go find your heart, little one.
A journey to Wonderworld we shall embark upon!
— Balan introducing himself to Leo and Emma
Advertisement:

Balan Wonderworld is a 3D platformer game directed by Yuji Naka, developed by Balan Company and Arzest, and published by Square Enix. The game is intended as a Spiritual Successor to Naka's earlier work, NiGHTS into Dreams…. The game was released on March 26, 2021, and a free demo was released on January 28 of the same year. An official novel titled Balan Wonderworld: Maestro of Mystery, Theatre of Wonders was also released alongside the main game, containing the game's whole story. You can check out its official website here.

The plot centers around Balan, a mysterious but charming showman who runs a magical theater. The player can choose to play as Leo Craig or Emma Cole, a young boy and girl respectively, who each come with a choice of four skin tones and hair colors. Whichever child the player chooses stumbles upon Balan's theater, and Balan takes them on an adventure through dreamlike worlds based on the lives of other people. The player must learn about the struggles of these people and save them from Lance, the Evil Counterpart to Balan who turns these people into monsters.

Cuckoo lurks in the depths of the world born from Sana's heart, embodying Sana's warped emotions. She throws eggs and uses her long tongue to fling nest boxes.

Cuckoo lurks in the depths of the world born from Sana's heart, embodying Sana's warped emotions. She throws eggs and uses her long tongue to fling nest boxes.