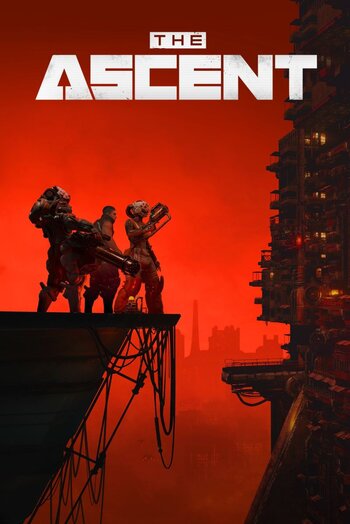 The Ascent is a mostly-isometric solo and co-op Action RPG developed by Neon Giant and published by Curve Games. It was released on PC and Xbox Series X|S on July 29, 2021 and March 24, 2022 for PlayStation 4 and PlayStation 5. It is Neon Giant's first released game after they were founded in 2018, and is built on the Unreal Engine.

In the future, corporations fight each other on the market, affairs run so quickly each corporations have developed advanced Artificial General Intelligences to handle the massive numbers of transactions that keep the corporations afloat. On the planet Veles, many come from various worlds for a new life and opportunity. Instead they find themselves in indentured servitude to the various corporations who paid for their trip to Veles. Forced to work until they work off their debts, inside the massive arcologies set up by each corporation. Your character is one such "indent", working out of Cluster 13 near the bottom of the Ascent Group's arcology as muscle. However one day, suddenly, the AGI running the corporation's affair goes unresponsive, and in a manner of seconds the Ascent Group's business is wiped out and they are bankrupt, leaving the Arcology with no owner, its staff with no more paychecks coming, no one to pay for the resources needed to keep the archology going. Now as gangs, mercenary groups and rival corporations all descend upon the arcology to pick clean the corpse of the Ascent Group, your character now finds themselves in the middle of all this. Stuck between the various powers fighting to claim the arcology and its former owners' wealth, and the residents trying to seize the opportunity to be freed from indentured service. And behind all this remains one major question: What happened to the Ascent Group and its AGI?

Gameplay trailers can be viewed here

The Ascent contains examples of: