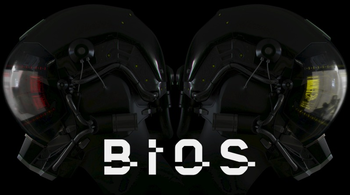 BIOS is a Endless Running Game and First-Person Shooter hybrid, developed by the Canadian Pixyul studio for PC and released on Steam on 13th of December, 2016.
Advertisement:

The idea behind it is that you are in a VR combat simulation, and so your task is to grab the gun and find the exit to the level you are thrown into in the fastest way possible, and the simulation scores you on that. Hence, you run through the recreations of various docks and office buildings (there are 8 "biomes" and 34 maps in total), while also dealing with the machine gun and missile turrets in your way, all while watching the clock, since "your assignment is to be the best".