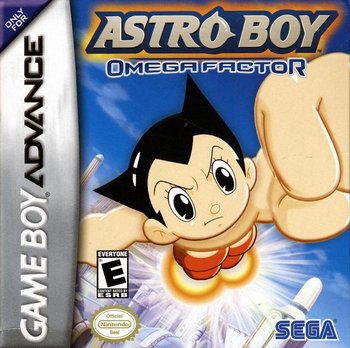 Astro Boy: Omega Factor (Known in Japan as Astro Boy • Tetsuwan Atom: Atom Heart no Himitsu) was based on Astro Boy, released in 2003 for the Game Boy Advance after the anime's 2003 reboot. It was developed by Treasure and Hitmaker and published by Sega. Many consider this game a massive aversion of The Problem with Licensed Games, and a fitting tribute to Osamu Tezuka.
Advertisement:

The storyline starts off by following the 2003 anime, but soon diverges from it by adding elements from several other Tezuka stories. Dr. Tenma, brilliant robotics expert, rebuilds his son as a robot after he is killed in a horrible car accident. When he realizes Astro is not a true replacement, he abandons Astro and disappears. After being adopted by Dr. O'Shay, Astro develops a sense of justice and sets out to resolve problems plaguing the relations between humans and robots.

In terms of gameplay, this is a Beat 'em Up where Astro can jump and air dash (he's invincible while dashing). Astro has a basic punch combo, although he may freely kick enemies away or fire a finger laser. He also has access to three special attacks that he can build energy for.

There are also a few Shoot 'em Up levels where Astro exclusively flies. He relies on his finger laser for offense, but can dash and use his specials normally.

Despite excellent reviews, this game was mostly passed over for the Playstation 2 game developed by Sonic Team and this fell into obscurity. However, those who did play the game loved it. The Astro Boy game for the Nintendo DS based on the American CGI film is inspired by this one, but unfortunately, it is widely considered to be inferior in every aspect.