The Little Shop That Wasn't There Yesterday 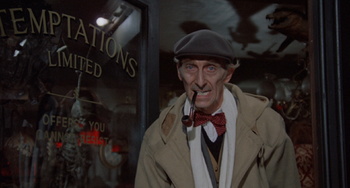 ''Temptations Limited. Offers You Cannot Refuse''? Has this shop always been here?
Marge: Eugh! Homer, where did you get that ugly thing?
Homer: From that little shop right over there—(Points to an empty lot, where sand devils whirl. He gasps in disbelief, then corrects himself.) Oh, no, wait, it was right over there.
Shop Vendor: (waving) You'll be sorrrrrrry!
— The Simpsons, "Treehouse of Horror II: The Monkey's Paw"

You know the place. It wasn't there yesterday. But right now, there's a shop there that looks like it came out of Charles Dickens—or maybe H. P. Lovecraft. If you go inside, you'll find a quirky old shopkeeper who has any number of potentially magical - and potentially inconvenient - artifacts available for sale. Cheap. Today only. Just what you were looking for - although you may not have known you were looking for it when you came in. In fact, these items may look just like any other shop merchandise, but they frequently have some weird supernatural properties.

Just don't expect it to be there tomorrow. Especially if you need a refund...

Originally a literary device from the surge of weird fantasy writing in the 1920s and earlier—H.G. Wells used it in The Crystal Egg (1897) and The Magic Shop (1903)—The Little Shop That Wasn't There Yesterday still turns up occasionally. Nowadays, it's often a website. Frequently an element of the modern Creepypasta; when the store is virtual, it overlaps with murder.com. A specific version of Revealing Continuity Lapse. A Mobile Kiosk has a good reason for being this.

open/close all folders
Anime and Manga
Comic Books
Fanfiction
Film — Animated
Film
Literature
Live-Action TV
Tabletop RPG
Theater
Video Games
Webcomics
Web Original
Western Animation
Homer: Marge! Did you replace our regular mirror with a magical mirror from a mystical salesman at a weird store that if we went back to find it it wouldn't be there anymore?
Marge: No.
Homer: AAAAAAAAHHHHHHHHHHHH!
Bart: Hey Homer, where's your present?
Homer: D'oh! I mean... D`oh-n't worry son, I forgot to get you a present. But I swear on my father's grave—
Abe: Hey!
Homer rushes off to the nearest convenient `House of Evil' "Your One Stop Evil Shop". He asks the very old Asian owner who appears out of the shadows if he sells toys.
Owner: We sell forbidden objects from places men fear to tread. We also sell frozen yogurt, which I call "Frogurt!"
Homer tells the owner that he is looking for a present for his son's birthday. The owner hands to him a talking Krusty doll. "Clown Without Pity" is based on the Twilight Zone episode "Living Doll" and the films: "Trilogy of Terror" and "Child's Play". The same monkey's paw mentioned above appears in the background of the shop, resting on the counter.
Owner: Take this object, but beware it carries a terrible curse!
Homer: [worried] Ooooh, that's bad.
Owner: But it comes with a free Frogurt!
Homer: [relieved] That's good.
Owner: The Frogurt is also cursed.
Homer: [worried] That's bad.
Owner: But you get your choice of topping!
Homer: [relieved] That's good.
Owner: The toppings contains Potassium Benzoate.
Homer: [stares]
Owner: That's bad.
Homer: [worried] Can I go now?
Bart gives a book report in front of the class.
Bart: From A-Apple to Z-Zebra, Baby's First Pop-up book is 26 pages of alphabetic adventure!
Mrs.K: Bart, you mean to tell me you read a book intended for preschoolers?
Bart: Well, most of it.
Mrs. Krabappel orders him to find another book to review. In the school library, Bart is unimpressed with the latest `Where's Waldo' book (``Man, he's not trying anymore!'') He looks around and notices the Occult wing of the library.
Bart: Gee, I never notice that before.
Bart enters holding a candle chosen from a human skull. A volume flies out from the shelf, striking Bart on the head.
Book: [Title: ``The Time Life Book of Magic and Spells, Vol.II'' Bart opens the book and four apparitions appear from the pages]
Apparitions: Evil!...EVIL!...MADNESS!...Beware!...BEWARE!
Bart: Cool! [slams book shut]
Book: Oww!...OWWW!...oww!...OWWW!
Real Life
Feedback