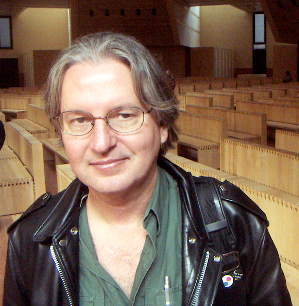 Michael Bruce Sterling (born April 14, 1954) is an American Science Fiction writer. He and his friend William Gibson are the two names most strongly associated with the Cyberpunk movement. Sterling more-or-less put cyberpunk on the map when he released the seminal collection, Mirrorshades: A Cyberpunk Anthology, featuring a variety of new writers. He was one of the most active promoters of the new genre. He was also one of the founders of the Turkey City Writers Workshop, which gave us the Turkey City Lexicon. He was also the first to use the term "Slipstream" in the sense that this Wiki uses it.

His breakout novel was Schismatrix; his third. He followed that up with the Campbell-award-winning Islands in the Net. He collaborated with William Gibson on The Difference Engine, and has written over half a dozen other novels and many short stories.

Works by Bruce Sterling with pages on this Wiki: