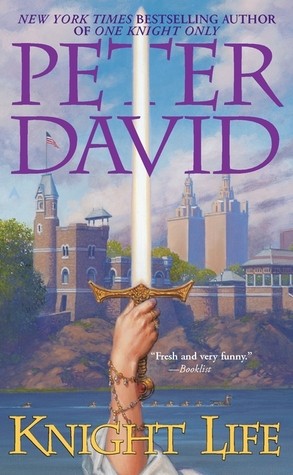 "Of course young people don't vote. It's a right handed to them, and therefore they don't appreciate it. Young people care about two things, and two things only: Those things they have to fight for, and those things they're told not to do. Going around telling teens to vote: that's your problem right there. You're telling them to do something. ... 'Every young person hearing this or watching this, listen to me now and tell all your friends I said this: Don't vote! Come election day, you are absolutely not to vote! I forbid it! I flatly forbid it!"
King Arthur "Penn" in a mayoral debate, Knight Life

Knight Life is a series of Urban Fantasy novels written by Peter David. The books are comic political fantasies about King Arthur returning in the twentieth century to become President of the United States. First, however, he must become mayor of New York City, which was covered in the first title, Knight Life. The original Knight Life was published in 1987 and since then, copies of the title became scarce. Peter David considered developing a movie of the book, but responding to demand, he published a revised version in 2002. The new version removes some of the more dated references in the original title (such as Republicans not being a major political force in New York City) and adds nearly 30,000 words of new material. The success of the new volume resulting in two more titles, making it a trilogy, though the later volumes never gained quite the attention of the original title.

The story of the original novel focuses on King Arthur running a political campaign to become mayor of New York as Arthur Penn. As very few can know that he is actually the original King Arthur, much of the campaign must consist of simply getting his name out there. Arthur sets himself apart from the other candidates by making a vow to never lie, no matter what anyone may ask him. He is aided by Merlin and Percival, as well as Gwen (Queen Quinevere reincarnated), but dark forces are working against him, including Morgana (Morgana le Fey) and his bastard child Mordred "Mo Dreskin."

The titles in the series are:

The original Knight Life provides examples of the following:

Alternative Title(s): Knight Life, One Knight Only, Fall Of Knight