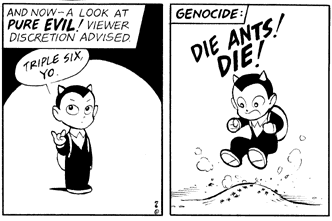 "A good person would brush his teeth... but not me, 'cuz I'm EVIL!"
Dr. Polaris: You gonna wash your hands?
The Flash (in Lex Luthor's body): No! 'Cause I'm evil.
— Justice League Unlimited, "The Great Brain Robbery"
Advertisement:

The tendency of "evil" to include not just major acts of villainy and attempts to take over/destroy the world, but also generally being an utter dick. Some examples include:

This is when you have a villain that slaughters a village, bombs a country, murders the president... And then picks a pocket, trips an old lady, sticks a kick-me sign on a police officer, takes someone's parking space, and cuts in line at a fast-food place.

They're not just evil on a large scale; they're evil on all the tiny little details of everyday life they might experience in any possible situation. This trope opposes Affably Evil and Evil Is Cool — this villain is just a colossal pain in the ass, even leaving their alignment out of the question. And often, they get a kick out of being a pain. And it must be pointed that petty motivations do not take from the cruelty and malice of the acts — in fact, they are just as likely to lead past the Moral Event Horizon, and may even make the villain more hated to the audience than they would be otherwise, as there is nothing grandiose or admirable about him. They are just a scumbag of a bully. More often than not, it is a trait of a Psychopathic Manchild.

In video game settings with a Karma Meter, this means that being classified as Evil requires not just being uncaring towards people, but going out of your way being nasty in any circumstances. This is an unfortunate side effect of there being an in-game benefit from reaching particular levels of evil. When maxing out your Karma Meter gives you a Stat Boost, you're strongly encouraged to do every little act of evil you can to get there as quickly as possible.

May overlap with Hate Sink, a character massively despised for actual villainous actions. Contrast with Poke the Poodle when all the supposed villain does is something actually harmless — they don't do anything overwhelmingly evil, but frequently behave like a mild dick to maintain their Villain Cred. See Harmless Villain for someone who lives for doing this.

An opposite trope is Affably Evil, in which a villain genuinely behaves in a very pleasant, friendly, and/or downright honorable manner. The Magnificent Bastard is well-advised to avoid this trope; magnificence and pettiness don't mix.

See Also: For the Evulz, Card-Carrying Villain, The Devil Is a Loser, Even Evil Has Standards. For examples where a petty action ends up harming the villain, see Dick Dastardly Stops to Cheat, The Dog Bites Back, and Stupid Evil. If the villain manages to keep his reasons secret until the climax and the protagonists act stupefied at the discovery of such a petty reason, see Disappointed by the Motive. Badbutts can have similarly petty motives.

On top of being an unrepentant Nazi, Klaus is also a shitty roommate who constantly pushes at boundaries, takes up more and more of the fridge for his beer, and uses Atun-Shei's computer without permission.

On top of being an unrepentant Nazi, Klaus is also a shitty roommate who constantly pushes at boundaries, takes up more and more of the fridge for his beer, and uses Atun-Shei's computer without permission.