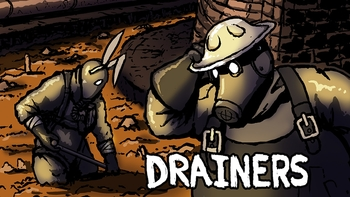 Dregs (also known as Drainers), is a webcomic by Alex Steacy (of LoadingReadyRun) that follows the lives of sewer workers.

One day, after being given an extra-large workload, two sewer workers, Chub and Coney, run into a young, nude woman apparently living in the sewers that they work in, who likes to make their work difficult either by interrupting them constantly or just stealing their supplies. Eventually, the two decide to track her down and attempt to capture her and turn her over to the authorities. Hilarity Ensues.

Along the way, the workers have to deal with their eccentric co-workers, vicious Rodents of Unusual Size, and one deranged aristocrat.

The comic was originally published in its entirety on Tumblr

from February 2016 to October 2017, and was also published in print and eBook formats by Cloudscape Comics in 2020 (where it was retitled "Drainers"), after a successful Kickstarter campaign.