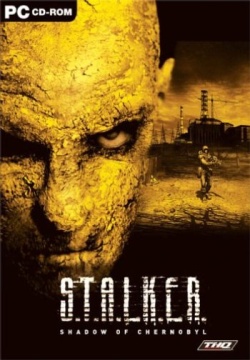 Attention: You are approaching the troper-secured perimeter of an ecological disaster page.

S.T.A.L.K.E.R.: Shadow of Chernobyl is a Wide-Open Sandbox First-Person Shooter by Ukrainian video game studio GSC Game World. It is loosely based on the Russian novel Roadside Picnic, as well as the visually stunning Russian film Stalker by Andrei Tarkovsky, which was based on the novel. The game is somewhat of a combination of the two, taking the novel's general premise and combining it with the atmosphere of the movie to create a truly haunting game experience.

The game takes place in the Zone of Exclusion (known simply as the Zone) around the infamous Chernobyl Nuclear Power Plant, a bleak and terrifying "Man-Made Hell" following the nuclear accident that originally created the Zone, as well as a mysterious second explosion in 2006 which resulted in the creation of bizarre, seemingly impossible space-time anomalies and homicidal mutants. The Zone is full of dangers, from lethal pockets of radiation, to packs of dangerous mutants, and a wide assortment of violent, body-crushing anomalies. Nonetheless, fortune-hunting trespassers known as "Stalkers" make a living exploring the Zone and seeking out the miraculous "artifacts" created by the Zone's anomalies.

Tales among the Stalkers tell of a legendary artifact known as the "Wish Granter", located at the very center of the Zone inside the Chernobyl Nuclear Power Plant itself. The legend goes that the Wish Granter will grant a Stalker's heart's desire. However, no Stalker has managed to reach the center of the Zone, as the path is blocked by a powerful barrier known as the Brain Scorcher which melts the minds of any humans who attempt to penetrate into the Center.

In S.T.A.L.K.E.R.: Shadow of Chernobyl, players take the role of the Marked One, a mysterious amnesiac Stalker who awakens in the Zone with nothing except a strange "S.T.A.L.K.E.R." tattoo on his arm, and the knowledge that he has a mission... to kill someone or something known as "Strelok" (Marksman). The Marked One's search for Strelok, and his interaction with the various inhabitants of the Zone and conflicting Stalker factions, will eventually lead him on a path to the Center of the Zone, the Chernobyl Nuclear Power Plant, and the legendary Wish Granter itself.

S.T.A.L.K.E.R.: Clear Sky is a prequel to Shadow of Chernobyl, with the player taking the role of a veteran Stalker mercenary named Scar who is recruited by a secret faction known as Clear Sky to investigate the cause of mysterious emissions from the Center of the Zone that pose a threat to all of the Zone's Stalker inhabitants. Besides an assortment of graphics and gameplay tweaks and improvements, Clear Sky features a new Faction Wars system, where the various competing factions in the Zone struggle for power and control via assaulting and defending various capture points (sort of like a single-player version of the Battlefield series, with an RPG game world thrown in on top for good measure). Players can join a faction and help them fight their way to victory, or ignore the Faction Wars completely and progress through the game's main quest.

S.T.A.L.K.E.R.: Call Of Pripyat, the third game in the series, is a sequel to the original game. Unsurprisingly, the Russian-language version (which came out several months before the EU and US versions) was almost immediately translated by modders. It takes place a few days after Shadow of Chernobyl with the player taking the role of SBU (Служба Безпеки України/Security Service of Ukraine) Major Degtyarev who is charged with investigating the attempted military takeover of the Zone Gone Horribly Wrong. Call of Pripyat is notable for taking place in a completely different part of the Zone from the other games in the series - Shadow of Chernobyl and Clear Sky take place fairly close to the Zone's southern edge, while Call of Pripyat takes place deep within the Zone's northern half.

at GamesCom. However, on December, 2011, it was announced that GSC had been forced into closure, though the team promised that the development would continue. The game was indefinitely put on hold in January 2012. In its stead, a majority of the development team broke off to create a Spiritual Successor, called Survivarium, but the rights of the franchise remains with GSC. Another outfit, West Games, which also claims to employ some of the original team, announced their own follow-up called STALKER Apocalypse, but questions surrounding its legitimacy

quickly came up, including some calling it an obvious scam. GSC, meanwhile, has reopened

Not much is known about the game, other than that the X-Ray engine used by previous installments in the series has been replaced with Unreal Engine 4, since most of the devs who had experience working with X-Ray had moved either to Vostok Games or 4A Games after the collapse of GSC. After a long period of silence, S.T.A.L.K.E.R. 2 was finally announced as a temporary Xbox Series X (and Series S) exclusive on July 23, 2020.

Similar to Half-Life, a Fan Remake of Shadow of Chernobyl titled Lost Alpha has been released. Like Black Mesa, Lost Alpha is big enough in scope that it's a standalone game all on its own. It is available for free on ModDB here

. See also Call of Chernobyl, a mod for Call of Pripyat that merges all of the games together into one large non-linear sandbox. It can be found here

. Call of Chernobyl itself has gotten a re-release under the label ANOMALY. It is a complete, stand-alone version, unlike CoC which requires an install of Call of Pripyat to play, and it runs on an updated X-Ray Engine that has been brought into 64-bit for increased performance and stability. It can be found here

, and it has quite a collection of mods itself. Due to licensing issues with the games, the original source code is freeware, so ANOMALY can be downloaded for free regardless of if you own any of the STALKER titles. As such, it can be a good, risk-free way of trying out the games, but bear in mind the plot is non-canon, and it is recommended you at least play Shadow of Chernobyl to understand the story.

Not to be confused with the Maggie Q show of the same name.

The Examples Are In The Basement: