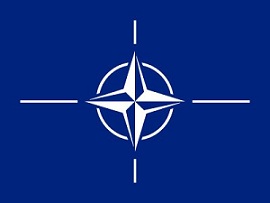 "Keep the Americans in, the Soviets out and the Germans down."
— General Hastings Lionel "Pug" Ismay, 1st Baron Ismay, first Secretary-General Of NATO,

stating the basic objectivenote At least for the British and probably the French of the organisation.
Advertisement:

NATO stands for North Atlantic Treaty Organisation. Set up in Brussels, Belgium to counter the threat of the USSR, it was the effective successor to the informal "Western Allies" of World War I and World War II, primarily centering upon those nations (the United States, the United Kingdom, France, Canada, etc) with the addition of West Germany. With the end of the Cold War, a number of former Warsaw Pact countries joined the alliance, which made the Americans happy — they got MiGs, Sukhois and T-72s to play with.

NATO has only been involved as a collective in three foreign conflicts — Kosovo, Operation United Protector in Libya and Operation Enduring Freedom in Afghanistan.

The most notable day to day part of NATO is QRA (Quick Reaction Alert). The NATO Air Forces that have the ability to launch fighter aircraft keep some of them (it rotates) on c.10 minute alert, scrambling them if any unidentified aircraft enter NATO airspace or something goes off course. Those countries, such as Latvia and Iceland, who can't do it for their own airspace have their duties covered for by others on a rotating basis (in 2008, RAF Typhoons were due to do Iceland's QRA, but it was cancelled after a diplomatic row due to the Icelandic banking crisis).

NATO has a massive number of mutual standards in the the weaponry field (known as STANAGs, or Standardisation Agreements), with the two standard rifle calibres used by them actually being called 5.56x45mm NATO and 7.62x51mm NATO in other publications. Since 1980, NATO rifles also have standardised magazine dimensions, with the 20- and 30-round magazines of the American M16 family being used in nearly all other 5.56mm assault rifles in NATO.note Ironically, despite this standard (STANAG 4179) being the most famous of them all, with the magazines being referred to as "STANAG magazines" even by gun owners who don't know what STANAG means, it and the accompanying STANAG 4181 (for the stripper clip and guide tool used to quickly load M16 magazines) were never actually ratified, making NATO members' compliance optional. The idea was to share logistical support in times of war by having everyone's guns use the same ammo, even if often it seemed like mostly acquiescing to whatever whim America had about calibers (first 7.62x51, then 5.56x45), with the exception of adopting the German 9x19mm round for handguns and submachine guns instead of the American .45 ACP (11.43x25).

Compared to the Warsaw Pact, individual NATO member states during had more freedom and power in the running of things, which led to problems like the lack of unified troop control (all the NATO corps were subordinate to their countries, not NATO), members often having opposed interests, and other political squabbles that could've led to hesitancy and indecision in potential crises.note America was by far the most powerful and influential member, not to mention the most aggressive. Most notably, the West Germans, both on account of all the crap from WW2, as well as being right on ground zero in event of a war, saw themselves as prospective chew toys. The French, as always, were difficult to work with. America and Britain were the most cooperative pair. The most prominent example is France, who under Charles de Gaulle actually withdrew the French military from NATO's integrated command structure in 1966 and asked non-French units (mostly American ones) to leave Francenote This also forced NATO's headquarters to move from France to Belgium. U.S. Secretary of State Dean Rusk is said to have asked if that included American soldiers buried in French cemeteries.; de Gaulle pursued this partly out of a desire to maintain French control over its own foreign policy (including the ability to pursue a separate peace with the Soviets in a prospective World War III) and partly because he bristled at what he saw as a close partnership between the United Kingdom and United States steering NATO's policies. France continued to be part of the alliance (it kept troops in West Germany during the Cold War to assist in its defense and made separate agreements with the US to have French units reintegrate back into NATO's command structure in case war broke out), but compared to the (enforced-by-backroom-strongarming) unity of the Warsaw Pact NATO didn't look as unified.

NATO's "official" plan in the event of a Warsaw Pact attack changed over the years. During the 1950s the plan was to establish the main defensive line on the Rhine while establishing a delaying zone at the border with East Germany (Inner German Border or IGB). By 1959, West Germany pressed for the main defensive line to shift further east as they did not want to see their most of their country occupied as part of the war plan. This influence shifted NATO's emphasis on Forward Defense—a plan that placed the main battle as close to the IGB as possible. Until the 1960s, both plans involved the first-use of nuclear weapons as part of "Massive Retaliation".

As the Soviet nuclear arsenal grew, Massive Retaliation was no longer credible and NATO adopted "Flexible Response". Flexible Response meant that the initial battles would be strictly conventional; if that failed NATO would resort to tactical nuclear weapons. Forward Defense was still retained as the primary guideline for conventional war. There was also planning for aid of reinforcements shipped over from the USA (under the ReFORGER - Return of FORces to GERmany - programme) to bolster the conventional forces. This concept remained NATO's warfighting strategy until the end of the Cold War.

While Forward Defense satisfied the West Germans in peacetime, there were significant problems with it. It created very little defensive depth. It was only 250 km from the IGB to the Rhine across the North German Plain and another 250 to the Belgian coast. Most NATO ground units were deployed in only a fraction of that. Moreover, NATO was generally focused on tactical defensive actions with only limited counterattacks to restore the forward edge of the battlefield. There were maldeployments. For example, the British combat area near Hanover was actually garrisoned by a West German division, while the British garrisons were all spread across the old UK Zone of Occupation.

Secondly, NATO rarely trained under a surprise attack scenario. In the 1987 exercise "Certain Strike" in northern Germany, it was assumed that the U.S. forces there (dependent on REFORGER reinforcement) would have the time and foresight to assemble and march an entire army corps to conduct a large counterattack, which might have been an illusory assumption if NATO was surprised to a significant degree.

The 1980s saw two supplements to Forward Defense, one immediate and the other more long-term. The first was an attempt to adopt methods that would "make the most" of their situation while keeping in the confines of the existing guidelines. In 1984, General Nigel Bagnall (commander of the Northern Army Group, 1983-85) advocated and partially implemented a plan that called for a strong counterattack element following a mixed positional and mobile defensive battle. The U.S. Army under their AirLand Battle doctrine sought to introduce a counteroffensive element 120-240 km into East Germany to disrupt a Soviet attack. While it is debatable if these new methods could actually stop a Soviet attack, they represented a willingness to address shortcomings in the existing war plan.

The second element was headed by U.S. General Bernard Rogers (Supreme Allied Commander Europe, 1979-87) in 1984. It involved the adoption of "emerging military technology" of the 1980s and implementing then in a strategy called Follow On Forces Attack (FOFA). Under FOFA, NATO would continue to rely on regular ground and air forces to defend West Germany, but they would be assisted by deep strike weapons that would attack enemy concentrations before they were committed to battle. For example, an E-8 JSTARS aircraft could detect tank divisions in Poland entering East Germany, which would be attacked in minutes by long-range missiles carrying guided antitank submunitions. The tank force would be only 40% effective by the time it hit NATO ground forces. The end of the Cold War stopped FOFA's implementation, although Soviet military theorists believed that the associated technologies signed the death warrant for old-style mechanized warfare.

Since NATO's raison d'être was to contain the USSR, it was supposed to be disbanded after the fall of the latter, but it continued to exist, and expand. Currently the NATO members' military budget is more than double that of all non-NATO nations combined. However, many members have not met their obligations to it for a long time, and it is uncertain how willing the western NATO nations would be to go to war to protect the newer, weaker eastern NATO nations at risk of conflict with Russia. NATO also had problems with running out of munitions during the airstrikes against Gaddafi in Libya. Given that apart from the US, most states in it do barely the bare minimum towards its upkeep, if even that, making it approach Paper Tiger status, and jokes that NATO really stands for Needs Americans To Operate. In the late 2010s and early 2020s, no-one really knew what its purpose was, and for that reason it was very much criticized. Many people and governments still see it as a mere extension of the U.S. Army, that only serves American interests, while some American officials

criticize NATO as the U.S. providing military welfare for European allies who don't or can't meaningfully contribute to their own defense; some European countries punching above their weight have historically had the same complaint (Poland had been particularly vocal in complaining about other members' reliance on the American military). Although NATO played a key role in ending conflicts in hot-spots like Bosnia, Kosovo, and Libya, there's always a war crime in stuff like that, so it's a bit of a mixed bag.

NATO has grown in steps since its initial founding in 1949, when the original 12 countries signed the North Atlantic Treaty in Washington:

The rest, by year of ascension:

Currently there are four countries that have indicated they wish to join NATO in the future: Bosnia and Herzegovina, Georgia, Kosovo and Ukrainenote The Crimean Crisis has caused significant issues to arise in terms of Ukrainian admission into NATO. Georgia's 2008 South Ossetia conflict with Russia makes any move towards NATO integration frought with risk. The other two have "Membership Action Plans" that lay out a path to eventually joining. As of 2018, Colombia has also partnered with NATO, being the first South American nation to do so, a move denounced by the left-leaning governments of the region.

Four other countries (Armenia, Azerbaijan, Kazakhstan, Moldova) have rather extensive cooperation arrangements with NATO but don't wish to actually join for various reasons. The possibility of Russian NATO membership has also been extensively discussed (especially in the 1990s), but recent events such as Russo-Georgian War and Russo-Ukrainian War have made any such developments impossible in the foreseeable future.

In addition, the United States also keeps a list of major non-NATO allies

with whom they can cooperate with on research and development agreements as well as receive legal exemptions with regards to arms export controls not available to other countries. The sitting President may designate any country as such with 30 days' notice to Congress. Since it was first created in 1987, the list goes: