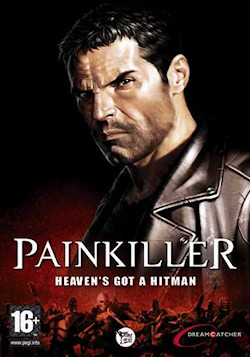 If video games got drunk and had one-night stands that resulted in pregnancy, Painkiller would be the product of the frenzied, S&M-laden coupling of Doom and Serious Sam.
— Steerpike of Four Fat Chicks

Painkiller is a 2004 First-Person Shooter made by Polish developers People Can Fly and published by DreamCatcher Interactive. The game concerns Daniel Garner, a man with an idyllic life, a beautiful spouse, and whose life is tragically snipped short when a truck plows straight into his car. Daniel gets to watch as his wife goes to Heaven, but he has to stay in Purgatory where he is commissioned by God to stop Lucifer's invasion. If Lucifer takes Purgatory, he can take Earth and Heaven as well. Oh, and Eve is your companion through the game. Yeah, that Eve.

The story is utterly auxiliary, though it lends itself to interesting interpretations. Either way, you can skip all the cutscenes and hop right into the game with no ill consequence. The game strings together massive battle after massive battle, tossing a bunch of novel guns into your inventory and setting you free in the Demon Preservation Hunting Grounds in the middle of Demon Hunting season.

Apart from the original game, People Can Fly also developed an expansion pack, Battle out of Hell, made up mostly of content that was cut or otherwise scrapped for the original game. Since then, the game's publishers have released other standalone expansions developed by fan modders, starting with Painkiller: Overdose in 2007 (developed by Mindware Studios from the Czech Republic), and following up with Painkiller: Resurrection in 2009 (by Homegrown Games), Painkiller: Redemption in 2011 (by Eggtooth Team), and Painkiller: Recurring Evil in 2012 (by Studio Med-Art).

A modern remake of the game, titled Painkiller: Hell & Damnation, was released on October 31, 2012 on Steam. It was developed by The Farm 51, the makers of NecroVisioN, who were themselves heavily inspired by the original Painkiller, and published by Nordic Games. The game is basically a "greatest hits" of the best levels from Painkiller and Battle Out of Hell, with a new engine and modern graphics, new weapons, and a new original story attached (Daniel is fighting to collect an army of 7,000 souls for Death, in exchange for being reunited with his wife Catherine). Notably, Daniel is now voiced by Jon St. John, the voice of Duke Nukem.

Not in any way related to a series of media featuring virtually immortal, ass-kicking Action Girls. Or the Judas Priest album.