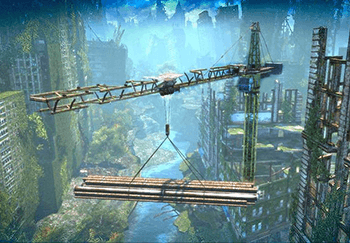 Crane rated to hold 1.7 tons for 9.2 centuries.
"[It] Takes a Licking and keeps on Ticking"
— Old Timex Wristwatch Slogan
Advertisement:

It is, understandably, common in post-apocalyptic fiction to show the ruins of society. However, despite being set several decades, or even centuries or millennia After the End, the remains of the pre-cataclysm society are still in remarkably preserved condition. Buildings and objects may have a lot of dust and dirt on them, but they haven't fallen apart due to neglect. Furthermore, any pre-cataclysm devices or vehicles that the characters find will work just fine.

If only one thing inexplicably survives, such as in a Time Travel or Earth All Along setting, it's known as The Constant.

This trope can be justified, in small doses, since there is an expensive way to render any metal rust-proof the same way that platinum is — one could assume that these relics have survived because of a similar process and the chemicals used in it are breaking down, allowing the relics to decay in places where the treatment faded first. This trope is also justified when dealing with advanced alien technology, as such technology may not necessarily decay as the same rate as modern Earth technology.

Societies with Ragnarok Proofing will allow a Scavenger World to exist, using Schizo Tech from many different time periods. Precursors frequently build like this — though usually the main effect is limited to the collective awe of upstart civilizations stumbling on their artifacts long after they became extinct or moved on.

The term Ragnarok (Ragnarök) originates from Norse Mythology where it means 'Destiny of the Gods'; although in modern consciousness it's better known as 'Twilight of the Gods' and associated with The End of the World as We Know It, largely due to a certain German composer by the name of Richard Wagner.

A subtrope of Sci-Fi Writers Have No Sense of Scale, Older Is Better and/or They Don't Make Them Like They Used To. See also Durable Deathtrap, Apocalypse Not, Apocalyptic Logistics, In Working Order, Absurdly Dedicated Worker and Never Recycle a Building. See Indestructible Edible for the food version and Gasoline Lasts Forever for the fuel version.