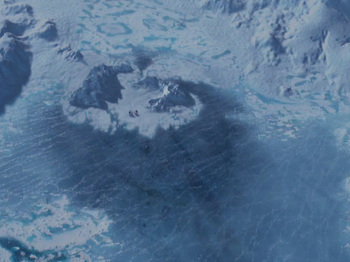 "We got home, Doc, and all it took was killing everyone we cared about."
Advertisement:

Incidentally, this is the 100th episode of Voyager.

Chakotay and Harry Kim beam down to a frozen planet where they find Voyager under a glacier of ice. Through flashbacks, the story is told of how the ship got to this condition: the crew of the ship was just unveiling its first fully-functional quantum slipstream drive which will get them home in a matter of days. However, Lt. Tom Paris isn't very optimistic, as he has been running various simulations and finding out that Voyager could be flying right to its destruction upon its first actual test of the quantum slipstream drive. Ensign Kim and Commander Chakotay offer to fly ahead of Voyager during their first test so that they could record data from their flight in the slipstream and send back to the ship any necessary changes so that they wouldn't be knocked out of it. As it turned out, this plan didn't work, and only Chakotay and Kim survived the trip back home, with Kim feeling the greatest guilt because he was responsible for what happened to Voyager's flight through the slipstream.

Fifteen years later, when Chakotay and Kim find Voyager again and reactivate the Doctor, they were able to get some important information from Seven of Nine's corpse so that they could send a message to the past with help of a stolen piece of Borg technology. The message was intended to send course correction changes so that Voyager would stay in the slipstream and not get knocked out of it, thus changing history, but as it turned out, the message did nothing to change the past. With a second attempt that occurred right before the Delta Flyer in the future was destroyed in a firefight, the quantum slipstream drive was simply shut down, and Voyager and the Delta Flyer safely returned to normal space, having shaved off 10,000 light years during their test flight.