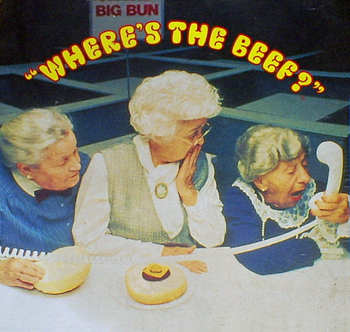 One of the most quotable advertising campaigns of the 1980s, "Where's the Beef?" was a 1984 Wendy's advertising campaign that starred octogenarian Clara Peller and two other old ladies (Mildred Lane and Elizabeth Shaw). Initially impressed at the size of the competition's hamburger buns, the trio is dismayed to find the burger patty underneath overly minuscule in comparison, which prompts Clara to ask, "Where's the beef?" The shtick of the ads was that Wendy's modestly-named single patty had more beef than McDonald’s Big Mac or Burger King’s Whopper, more than enough to fill the bun.

The ad quickly reached memetic status, and was referenced in the 1984 Democratic primaries by both sides. The slogan's success spawned a host of merchandise, including stickers, mugs, coasters, a board game, and even a single

released on vinyl record. Several sequels were filmed with Clara's character going to different restaurants to demand where her beef was.

Though the ad campaign lasted only a year, its appeal lives on; in 2011 Wendy's briefly resurrected the phrase. The original ads can be seen here

, and the revival ad can be seen here

These ads and related media contain examples of: