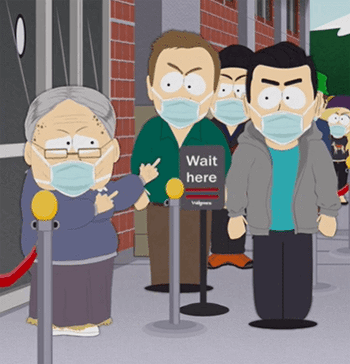 "You there! Give me your chair, I'm a hundred and seven!"
— Auntie Muriel, Harry Potter and the Deathly Hallows
Advertisement:

Many senior citizens in fiction believe that the rules of manners and society no longer apply to them once they reach a certain age. Essentially, "I can get away with anything, because I'm old!" When racist or sexist statements are involved, this may be a case of a person experiencing temporal Values Dissonance in his own lifetime. Or he's just a Jerkass who no longer feels obligated to play by society's standard rules.

Sadly, this too often is a case of Truth in Television, but it can also be a case of a young person interpreting the reaction to their own rudeness as a "rude old person being a jerk to me". Also, senility is less common than one has come to expect, so anyone with wrinkles and gray hair can use this as Obfuscating Insanity. Often they enjoy it so much they do it all the time. When Elders Attack, you can never tell if it's a crazy one or a Retired Badass telling you to get the hell off his lawn.

See also Grumpy Old Man, When I Was Your Age..., Evil Old Folks (when this goes too far, and moves from impoliteness to villainy) and Curse of The Ancients (when a senior tries to be impolite but fails comically because they lag behind in the curseword fashion industry for half a century or so). May result in Racist Grandma. On the flip side, it can also be a trait of the Cool Old Guy, or its female counterpart.

Bob needs to buy stuff to decorate his float, but Edith and Harold are not making it easy for him.

Alternative Title(s): Screw Politeness I Am A Senior

Bob needs to buy stuff to decorate his float, but Edith and Harold are not making it easy for him.