Advertising / Wienerschnitzel: The Delicious One 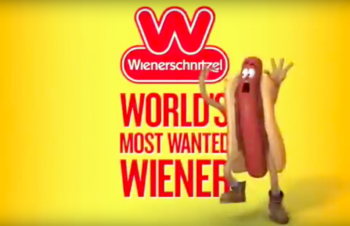 On the run since '61
Advertisement:

American fast-food restaurant chain Wienerschnitzel has aired a number of commercials involving The Delicious One, or just TDO, who happens to be an anthropomorphic chili dog always running away from people wanting to eat him. He was created in 1999 by his voice actor Luke Thomas and developed by Lane & Jan (Lane Nakamura and Jan Chen).

In 1997, Creative Director Courtney Betley and Senior Art Director Julia Cadar set out to create the World's Most Wanted Wiener for Wienerschnitzel, with TDO coming to mind. The character of The Delicious One (or TDO) began as a Claymation character, created and voiced by Thomas and developed by Loose Moose in London (who was beginning work in the United States) in 1999. This early version of TDO had misread every situation; somewhat naive, TDO thought everyone always wanted him around due to his delightful personality and charm, only to quickly discover in almost every situation that they wanted to him for more nefarious reasons (they wanted to eat him). He was constantly on the run, trying to escape the clutches of hungry people.

He has not appeared in any commercials that depict his CGI, speaking self since 2008. He's only been in animated form or as a costume. Some Wienerschnitzel fans have made petitions demanding his return in CGI capacity.