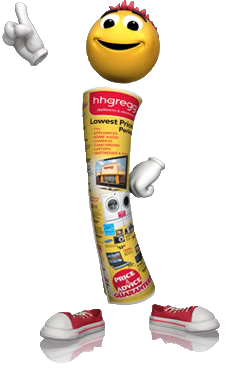 hhgregg is a electronics and appliances retailer from the United States. They have a series of commercials featuring their mascot, hh, a sentient rolled-up hhgregg advertisement. The commercials primarily feature him, but he does interact with other hhgregg employees in certain commercials, voiced by Wally Wingert. hh was featured in commercials between 2009 and 2011. When hhgregg became an online business in 2017, they brought back hh as the company's mascot and featured him in social media posts.

Tropes exhibited by hh and the commercials featuring him: