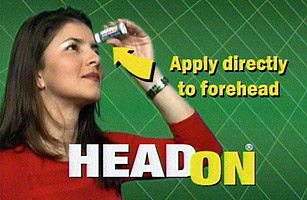 HeadOn, apply directly to the forehead.
A "medical" product known for its annoyingly simple commercial. Literally, the entire commercial

Sold as a "homeopathic remedy", the product is actually a wax stick that (obviously) does absolutely nothing when applied to the forehead. The "active" ingredients are two types of poisonous flowers and a carcinogen, but don't be concerned; as per norm with homeopathy, they are diluted to parts per trillion. You probably encounter higher doses of things sitting on your couch breathing.

Tropes, apply directly to the forehead.

HeadOn, I HATE your commercial! But I LOVE your product.