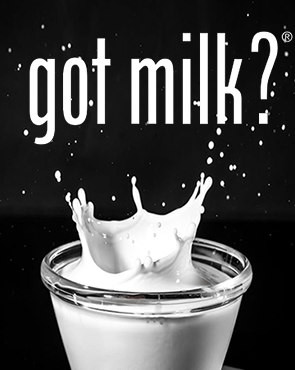 Got Milk? (or got milk? as it's normally rendered) is an advertising campaign by the California Milk Processor Board, advertising (what else) milk. The ads are typically some sort of celebrity or fictional figure encouraging the consumption of milk, usually with a "milk moustache" on their upper lip. Due to the campaign being widespread, it's been "endorsed" by some pretty odd characters and figures, including Shrek, Batman, and even Whoopi Goldberg.note Who's lactose-intolerant and initially did not sign on to the campaign until lactose-free milk became available

The campaign initially lasted from October 24, 1993 to February 24, 2014, when it was replaced with a new slogan called "Milk Life". However, its chocolate milk-focused variant (titled Got Chocolate Milk?) is still in active promotion, and the Got Milk ads themselves still run in California.

The campaign was revived

in 2020 in the wake of increasing sales due to the COVID-19 Pandemic.

Example of:
Product as Superhero