Our Slogan Is Terrible 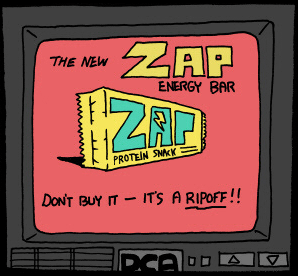 Slogans used by fictional businesses tend to be bad. By that we mean, of course, very, very bad.

They come in many flavors, including:

Compare and contrast What Were They Selling Again?, when a slogan or ad is so good that it fails by detracting from the more important message "Buy our product." See also Our Product Sucks, when this is invoked intentionally for Reverse Psychology.