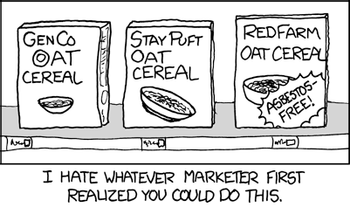 Wait, Don Draper did that for cigarettes in 1960. How can you hate him?
"The best part of this As Seen On TV item is the commercial itself, which expresses the product's versatility, which allows it to be used on either a gas or electric stove top — you know, like pretty much every other pot in existence."
— Matthew Santoro, on the Pasta Pot, Top 10 As Seen On TV SCAMS!

To protect us all from lies and fraud, the government makes sure that everyone only tells the truth in their advertisements — in the most literal, mundane sense of "truth". However, that doesn't stop advertisers from trumping up neutral, insignificant or even negative aspects of their products as though they were positive, by using phrases like "real", "100%", "free from" and "pure". The things these ads say are true, but not necessarily good things. It works because the standards for those products are esoteric or obscure: if you hear it repeated often enough, you'll assume it actually is a good thing because you don't know any better.

The ad can imply that competitors' products do not do this because they fail to measure up to the same standards. After all, if this brand of dry cereal proclaims so loudly that it is 100% fat free while the rest are silent, that means other brands are just dripping with lard, right?

To be clear, this trope does not refer to labels that are used mistakenly or fraudulently. It's only Asbestos Free Cereal if the advertisement is entirely true, but misleading in that the claims it makes are actually insignificant (they apply to all products in that category or just have no bearing on the product's quality at all) or negative (somewhat rarer), repackaged to seem positive and desirable.

The technical term for this kind of statement is a "preemptive claim" and depending on the jurisdiction it may be illegal or subject to certain restrictions, regulations or required disclosures.

Sister tropes are Lite Crème, All-Natural Snake Oil, and the somewhat more malicious Never Needs Sharpening. A form of False Reassurance and Turd Polish. Contrast Unfortunate Ingredients. Compare Suspiciously Specific Denial and Adjacent to This Complete Breakfast. Compare and contrast Wants a Prize for Basic Decency, where a person sees themselves not being a massive Jerkass as some sort of major selling point.

For the rare cases in which advertisers just flat-out admit the product they're shilling has many flaws, see Our Product Sucks.

Good, Pure, Real, 100%, and All-Natural
Free, Clear and Hypo-Allergenic
Only Our Product Has...
Other Claims (to be sorted)