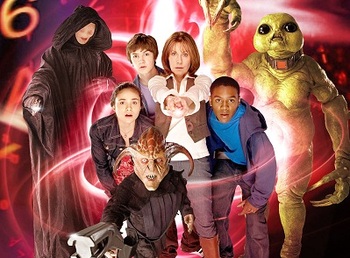 "13 Bannerman Road is where Sarah Jane Smith lives, and it's home to things way beyond your imagination."
— Clyde Langer
Advertisement:

A Spin-Off of Doctor Who (set, of course, in the Whoniverse), made for CBBC. It starred Elisabeth "Lis" Sladen, reprising her role of Sarah Jane Smith, investigative reporter and former companion of the Doctor (in his Third and Fourth incarnations) in the classic series. The series lasted from 2007 to 2011, when Sladen passed away.

This was the second attempt to produce a Sarah Jane-centric Spin-Off, the first being 1981's K-9 and Company; only a pilot episode of that was produced. After a guest appearance in 1983's Doctor Who anniversary episode "The Five Doctors", and the charity special "Dimensions in Time", Sarah Jane wasn't seen on TV again until her return in the 2006 episode "School Reunion". Following the exceptionally good reception of that story, The Sarah Jane Adventures kicked off with a one-hour-long "pseudo-pilot"note So-called because, while a full series had been commissioned, production actually didn't begin until after the "pseudo-pilot" aired; presumably, had it bombed in the ratings, production of the remainder of Series 1 could have been cancelled. special which aired on New Year's Day 2007, followed by a full series of ten episodes later that year.

Sarah Jane appeared to be a bit of an eccentric recluse at first, but it turned out she was really an expert on aliens and their technology. She was joined by local kids Maria and Clyde, as well as her adopted (and Artificial Human) son, Luke, as they battle aliens on Earth... well, in Ealing anyway. Later episodes introduce Rani, Clyde and Luke's schoolmate, and Sky, Sarah Jane's adopted alien daughter (a character introduced late in the series as a replacement for Luke).

SJA is sort of the opposite of the other Whoniverse spinoff, Torchwood. Where Torchwood is Darker and Edgier, The Sarah Jane Adventures is (ostensibly) Lighter, Fluffier, and For Kids. Like Torchwood, the series occasionally crosses over with Doctor Who proper. Characters from both spinoffs appeared in the Doctor Who story "The Stolen Earth"/"Journey's End", where Sarah Jane and Jack meet and become friends. The Doctor also occasionally pops up in SJA, in his tenth and eleventh incarnations.

The series was cancelled following Sladen's death, but three out of the six planned two-parters for Series 5 were already completed and aired posthumously in October 2011. Although UK media reported that the BBC was considering continuing the series in some fashion, common sense prevailed and the series was retired. Russell T Davies and Phil Ford swiftly created a replacement series, Wizards vs. Aliens, which allowed most of the production team (though not the cast) of SJA to keep their jobs. At least one episode of WvA ("The Thirteenth Floor") was adapted from one of the episodes that had been planned for SJA's fifth season but never filmed due to Sladen's death.

Now with its own recap page. Please feel free to contribute.

And the story goes on...

...Or does it? On April 19th 2020, nine years after Sladen's death, a special minisode, "Farewell Sarah Jane", premiered, written by Russel T. Davies, and intended as the final word on the character.