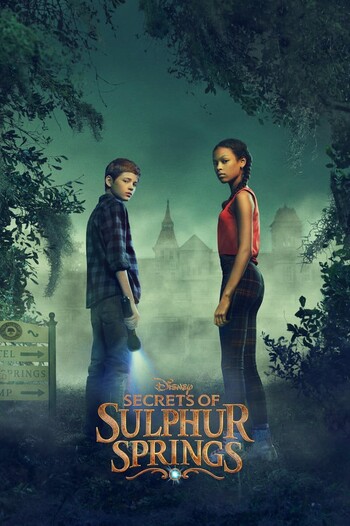 Every secret has its time and place.
Secrets of Sulphur Springs is a Disney Channel horror/mystery series that premiered on January 15, 2021.
Advertisement:

It follows Griffin Campbell after his father Bennett uproots their family from Chicago for mysterious reasons and purchases the Tremont, a run-down hotel in his hometown of Sulphur Springs, Louisiana, with the intent of fixing it up and reopening it. The hotel is rumored to be haunted by the ghost of Savannah, a young girl who disappeared from the hotel's summer camp in The '90s.

Griffin and his new friend Harper discover a fallout shelter under the hotel that contains a portal that allows them to travel back to Savannah's time. Together, they work to uncover the mystery of Savannah's disappearance and how it intersects with their parents' mysterious past.