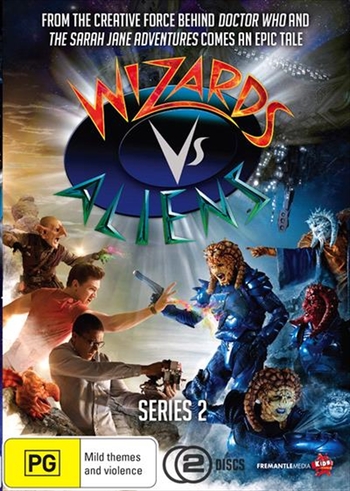 Wizards vs. Aliens, a CBBC Science Fantasy series for children from Russell T. Davies and Phil Ford. The premise is Exactly What It Says on the Tin. The evil Nekross, who eat magic, have come to Earth, the last place in the universe where their foodstuff still exists. They are opposed by young wizard Tom, his Muggle friend Benny, and Tom's eccentric grandmother Ursula.

The series has a bittersweet genesis. It was initially intended as a six episode "replacement" series to air instead of The Sarah Jane Adventures while Elisabeth Sladen, who played Sarah Jane, recovered from cancer. After her death, it served as its Spiritual Successor. The Series 2 episode "The Thirteenth Floor" originated as an unproduced script for Sarah Jane Adventures, never made because of the cancellation of the series.

Three series have been made so far; the show has been on an indefinite hiatus due to budgeting issues since late 2014.