They Called Me Mad! 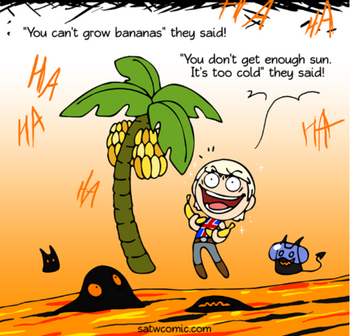 Iceland's marketing campaign for magmananas practically erupted onto the scene.
"Even I laughed at me when I invented this alien cross-species genetic analyzer! But I guess I showed myself!"
— Professor Farnsworth, Futurama, "Kif Gets Knocked Up a Notch"
Advertisement:

Scientists may be open to new ideas but are not by any means paragons of universal open-minded acceptance. This is heavily exaggerated in fiction. What does a peerage of scientists do when presented with amazing or disturbing theories that could seriously change everyone's worldview and/or revolutionize science by one of their fellows? Do they test out the theory themselves, analyze it thoroughly, or interview their fellow scientist in an effort to find any truth in his "wild" theories or disabuse him of them before he goes crackpot?

Of course not! Everyone knows that's not how you do research! The establishment will be fiercely jealous, and they'll mock him, never take a second glance at his theories, and do everything possible to discredit him, bury his ideas, and make him shunned in respectable scientific circles.

The outcomes are usually:

Apart from purely scientific backlash, jealousy, and spite, there may also be pressure on them from other motivations; for example, if you claim your planet is not the center of the universe or that leaded petrol is unhealthy. Compare Ignored Expert.

Occasionally, they will be one screw short of becoming a Mad Scientist before this falling out, or have the typical personal tragedy motivating Professor Guinea Pig. In these cases, his peers aren't so much fools as they are (rightly) concerned that his experiments have fallen down the slippery slope of scientific inquiry into grave robbing, God-defying Mad Science.

At the outset of the story, he'll usually be on hard times, and probably have become a recluse or in a dead-end job. Or... will use their Super Prototype to branch into supervillainy.

Compare All of the Other Reindeer, And You Thought It Would Fail, and Who's Laughing Now? With variant #1 especially, this is frequently a motive behind Disproportionate Retribution.

According to NASA’s biographical records on the man, "[t]he resulting ridicule created in Goddard firm convictions about the nature of the press corps, which he held for the rest of his life."

He showed them. HE SHOWED THEM ALL! [evidence of evil laugh not found (but certainly assumed)]