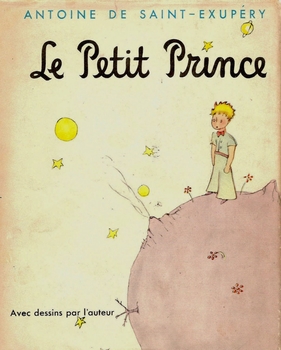 Once upon a time there was a little prince who lived on a planet that was scarcely bigger than himself, and who had need of a sheep.
"Please, draw me a sheep."
Advertisement:

A worldwide literary classic (it's been translated into 190 languages), The Little Prince (Le Petit Prince in French) is a 1943 children's book written and illustrated by French aviator and count Antoine de Saint-Exupéry. It is the fictional account of a French aviator whose plane crashes in the Sahara desert, a thousand miles from civilization. While trying to fix his plane and expecting to die of thirst within days, he is approached by a young boy who requests that he draw him a sheep. The rest of the story is mostly about the boy (thereafter referred to as the little prince) relating to the narrator his life on an asteroid and his travels from planet to planet in search of the meaning of life. While the Prince talks, the narrator continues to work on his plane.

While the book was written for children, the philosophical content appeals to any adult reader, as during the prince's adventures he encounters analogues of many of the traits of modern humanity, and learns about love and friendship from the plants and animals he meets.

Adaptations have mostly been for the stage, but there's also a 1974 movie musical by Lerner and Loewe and a 1979 Claymation short. It also inspired an anime