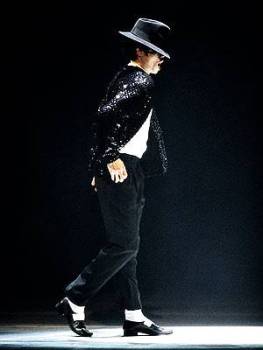 Wow! How do you do that thing with your feet?
Stand on your tiptoes, then bring your foot down. Move into it. Now you're moonwalkin'!
—Deadpool, Marvel vs. Capcom 3
Advertisement:

In 1983 Michael Jackson appeared during the Motown 25: Yesterday, Today, Forever anniversary special. After performing with his brothers he did a solo performance, namely his hit song "Billie Jean" from his then recent album Thriller. As Jackson amazed the crowd with his smooth and undeniably "cool" dance moves, he suddenly premiered a dance that looks like the person is walking forwards while going backwards at the same time. Despite only lasting a few seconds, the crowd went berserk and next day Jackson was the talk of the town, increasing his already massive national and international exposure. Fred Astaire saw the show on TV and personally called up Michael to meet him and show him how to do that particular dance, a question many people back then wondered about. Several have tried it and it is possible to do after much practicing, but remains quite complex for beginners.

The dance was dubbed the moonwalk, because it seemed as if the performer was walking on the moon while doing it. It became an essential part of every Jackson concert and for many people the highlight of the show. He named both his autobiography and movie Moonwalker after it and the dance became one of his trademarks.

Yet Michael didn't invent it, as he was quick to point out himself. He had learned it from some black school children in the early 1980s, who knew it as "The Glide". Other sources claim he was inspired by James Brown who also used the move and/or mime artist Marcel Marceau during his famous "walking against the wind" sketch, where he pretends to be pushed backwards by a gust of wind. Even Cab Calloway claimed that the dance move had been around since the 1930s and that they called it "The Buzz" back then. Others claim it was named the "backslide". However, none of these early prototypes quite match the magic and swift perfection of Jackson's performance. Generally most of them are much slower and the dancers don't move backwards very far. Although if they had the same amount of massive media exposure Jackson had at the time things might have been different.

Nevertheless the dance is nowadays universally recognized as the moonwalk. And although Jackson wasn't the Trope Namer for the moonwalk he is definitely the Trope Codifier. Since he popularized it and made it his trademark virtually all appearances of a moonwalk in popular culture will automatically be assumed to be a shout-out to the "King of Pop". Because of this it has become both a Stock Pose as well as a Stock Parody.

Upon getting Dr. Faust, Dante doesn't just do the Moonwalk, he channels MJ for a good 25 seconds.

Upon getting Dr. Faust, Dante doesn't just do the Moonwalk, he channels MJ for a good 25 seconds.