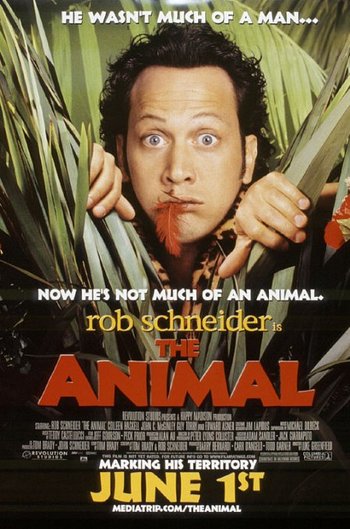 The Animal is a 2001 comedy film directed by Luke Greenfield and starring Rob Schneider.

Marvin Mange is a man who works as an evidence clerk at a police station. He is a meek and uncoordinated person who gets bullied by his neighbor's dog and Sgt. Sisk (John C. McGinley). While doing some work, he gets a call from a police officer about a robbery. Unfortunately for him, no one is coming there and Marvin is forced to go there by himself.

While going to the scene of the crime, he gets into a car accident where he is completely crushed. That is, until he is rebuilt as a man with animal parts and their instincts. It helps a lot in his work, though, and he's promoted to full officer. Then vicious attacks on the townspeople are attributed to a supposed beast-man, making Marvin the prime suspect...