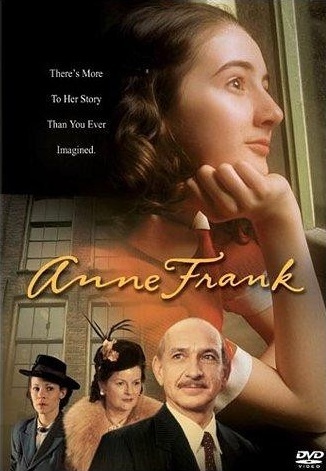 I still believe people are good at heart.
"I want to be a champion skater and a writer, I want my picture in all the magazines. Maybe I'll be a movie star...I want to be different from all the other girls. I want to be a modern woman! I want to travel, I want to study languages... languages and history! I want to do everything..."
— Anne's Opening Narration
"We've suffered before, and it's only made us stronger!"
— Anne to Peter
Advertisement:

A two-part Mini Series and Bio Pic on the life of teen Holocaust victim Anne Frank. Premiering on ABC in May 2001, it's been called the most accurate portrayal of Anne Frank's life (even though no real diary passages were used), and is so far the only film to go through her life in the concentration camp, and actually doesn't end until a month after she has died.

The film starts in 1939, with Anne already going to her Jewish-only middle school, and having a fairly normal life with her friends. However, it all begins to crumble around her the first time the propaganda and Antisemitism hits hard. Anne receives a diary for her 13th birthday, and begins writing about all the terrible things happening to her, up to the day her older sister Margot receives a call-up notice to report to Bergen-Belsen for work. With no other choice, the Frank family, along with family friends the Van Pels, have to live in a two-story, but extremely cramped, attic, and manage to stay hidden for almost three years before an anonymous tip sends the Nazis their way.

While this is where the play and original black and white film ends, as mentioned above, this film goes much further, and manages to give beautiful, accurate (the actresses actually cut all their hair off!), and definitely heartbreaking moments, leading up to a month after Anne died. Hannah Taylor-Gordon, who played Anne, received both Golden Globe and Emmy Award nominations for her performance as Anne Frank, while Ben Kingsley won a Screen Actor's Guild Award for his performance as Otto Frank, Anne's father. The film has sadly never been in theaters, but the DVD is available now, and the entire film