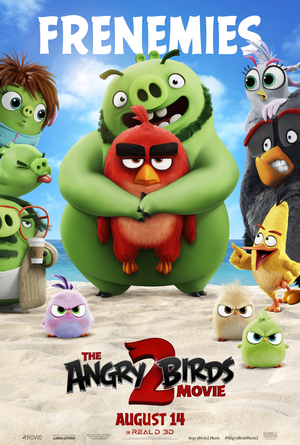 "Ice" to be back!
Advertisement:

The sequel to the 2016 film, this time helmed by The Marvelous Misadventures of Flapjack creator Thurop Van Orman.

The film picks up some time after the end of the first with the birds and pigs still against one another. However, things change when the pigs find out there's a third island, a snow-covered place, whose leader, a purple eagle named Zeta, has decided she wants a change of venue and targets both the bird's and pig's islands. Seeing this, King Leonard Mudbeard returns to Bird Island and convinces Red to have the birds and the pigs team up together against this mutual enemy.

As before, this is a collaborative effort from Sony/Columbia Pictures and Rovio Entertainment, with Sony Pictures Imageworks once again handling animation. However, unlike the first film, Imageworks' sister studio Sony Pictures Animation (of Spider-Man: Into the Spider-Verse and Cloudy with a Chance of Meatballs fame) also co-produced this film as well. The film was released on August 14, 2019 in North America (coinciding with the tenth anniversary of the mobile game), but was first released in the UK and Ireland on August 2, 2019.

The film's North American theatrical release was preceded by Hair Love, a Kickstarter-funded short created by Matthew A. Cherry and Bruce W. Smith.

, with tropes about it here.