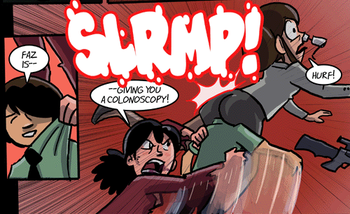 A demonstration of both versions of the trope.
"Five long years, he wore this watch up his ass. Then when he died of dysentery, he gave me the watch. I hid this uncomfortable hunk of metal up my ass for two years."
— Captain Koons, Pulp Fiction
Advertisement:

Quite simply, this trope covers the act of putting something into or pulling something out of a character's rectum — or, alternatively, merely implying the act. Usually, this is done for comedy; however, it's inevitably an object-version of a Black Comedy Rape.

A variation of this trope is to give a character a rectal examination, an enema, a rectal laxative, or some other similar medical procedure, whereupon Hilarity Ensues. Often, just having the character bend over while the physician or Battleaxe Nurse snaps on a rubber glove is enough to play the joke.

Sometimes paired with All Gays Are Promiscuous, to demonstrate that gays chase Anything That Moves.

Also see Trouser Space, Bowel-Breaking Bricks, Orifice Invasion, Suppository Gag, and Thermometer Gag. Nose Shove can be a variation used in child-friendly works. See Mister Seahorse and Homosexual Reproduction for when the ass in question belongs to a male and the object in question is an infant.

Truth in Television, but such things are almost never as funny or as safe as they are in fiction; the rectal walls are surprisingly fragile and can be easily ruptured if a foreign object is recklessly inserted. Indeed, a number of people who got a little too experimental with their exhaust pipes have suffered serious blood loss and even death from accidentally tearing these walls open. For these reasons, Don't Try This at Home.note Unless you know the anatomy involved, know what's safe and what isn't safe, and are either a medical professional conducting a legitimate procedure or engaging in a fetish in a Safe, Sane, and Consensual manner with yourself and/or a willing partner, obviously!

Subtrope of Joke of the Butt. Not to be confused with Ass Pull, which is when a plot device or explanation seems so poorly contrived as to have a rectal genesis (although sometimes both happen to walk hand-in-hand — or rather, dance cheek-to-cheek). Nor to be confused with Ass Kicks You, when using one's backside as an actual weapon.

Mr. Stevenson fell victim to this when Harry Sachz attacked him under the impression that he was the one behind the repeated prank-calls that Harry Sachz had to deal with.

Chicken Up His Ass

Alternative Title(s): Shove Up His Ass

Mr. Stevenson fell victim to this when Harry Sachz attacked him under the impression that he was the one behind the repeated prank-calls that Harry Sachz had to deal with.

Chicken Up His Ass