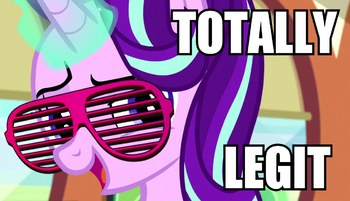 Crunk as Fuck
"Well, this has fuck all to do with me, so I'ma go eat a tub of ice cream and flick it 'til I pass out."
— DWK (as Starlight)note Just to give you an idea of what you're in for.
Advertisement:

Totally Legit Recap is a series of irreverent videos by YouTuber DWK. They fall somewhere between an Abridged Series and a review/analysis series of My Little Pony: Friendship Is Magic, with a focus on raunchy meta humor that would make Deadpool proud, mixed with the occasionally surprisingly insightful analysis, Self-Deprecation, and DWK drooling over his waifus. The series began with Season 6 of Friendship Is Magic, and has just spiraled from there.

. Initially, DWK did every single episode, and mostly in order. However, toward the end of Season 7, he began falling behind, and eventually began just doing whichever episodes struck his fancy, with no particular order or pattern to them.

After an unannounced hiatus that lasted over a year, DWK officially cancelled the series

, owing to Friendship Is Magic ending in 2019 and a number of real-life personal issues. He would eventually resurface as Tonkatsu Sinclair, an Affectionate Parody of a Virtual YouTuber.

Okay. *Cracks beer open* So. These are the fucked-up tropes in this shitshow:

Ah'right. Time to go drink a fifth and jack off. Not necessarily in that order.