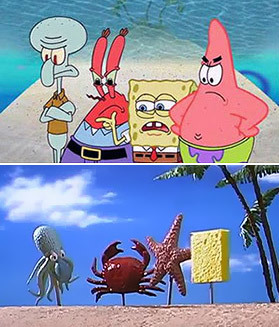 Who looks like a puppet when out of the sea?
Advertisement:

So you're watching your favorite Saturday Morning Cartoon, all the bright and colorful characters are bouncing across the screen, and... oh hey, one of them is a puppet now. Or a clay-animated doll. Or a stop-motion figurine. Or a guy in a purposely bad costume.

This is the Medium Shift Gag, a joke that plays on the audience's expectations for a show to keep to a certain medium, but catches them by surprise when suddenly the world they've been witnessing is viewed through a strange and different new light, if only momentarily.

Usually Makes Just as Much Sense in Context. Differs from Medium Blending, which usually involves two or more different media constantly mixing together in the same work, while a medium shift gag involves a quick and abrupt change that's Played for Laughs.