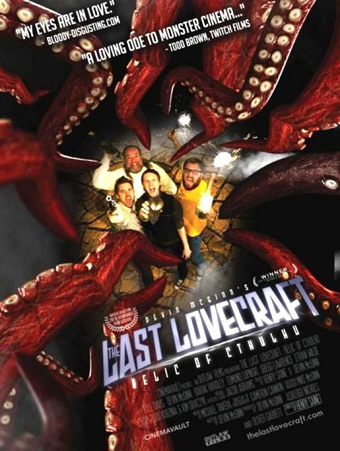 The Last Lovecraft: Relic of Cthulhu is a 2009 indie comic-horror based movie using characters and elements from H. P. Lovecraft's Cthulhu Mythos. It sees Charlie and Jeff (the last member of the Lovecraft bloodline) get thrown into a battle between two ancient cults; as they must defend an indestructible artefact that will bring doom to the world if it falls into the wrong hands. Along the way they meet up with a nerd that lives with his grandma, a creepy motel owner, a ship captain in the middle of the desert and the main antagonist Starspawn.

It's more comedy than horror and will definitely appeal to fans of campy horror and Lovecraftian lore.

The Film Contains Examples of the following Tropes: