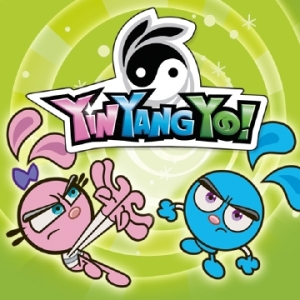 "In a world of chaos and disarray
Brother and sister save the day!"
"When might and magic work as one
A villain's plan can be undone!"
Advertisement:

Yin Yang Yo! is a 2006 Canadian-American Animated Series produced by Jetix as its third original series (after Super Robot Monkey Team Hyperforce Go! and Get Ed) for its programming block on Toon Disney (later Disney XD) in the United States and Family Channel in Canada. It retains the same creative team behind Nickelodeon's The Fairly OddParents and Danny Phantom so naturally there are quite a few similarities; in addition, the animation style is very reminiscent of Wow! Wow! Wubbzy! due to both shows sharing the same creator, Bob Boyle.

Yin and Yang are twin rabbits: the former, a studious and socially aware girl, is constantly mortified and embarrassed by her dirty, disheveled, violent, greedy, and self-indulgent (but still miraculously on the side of good) brother, Yang. Together, they study the ancient art of Woo Foo under the tutelage of the grumpy old panda Master Yo, who once had his own Woo Foo glory days.

Yin's studies are Woo Foo magic while Yang's are Woo Foo combat, hence the "might and magic" standard above. They both are eager to prove themselves, partly because they want to master what they've learned, but also because the Big Bad has rendered it so the entire world thinks Woo Foo is stupid and laughable. The problem is that, as twins and polar opposites, they get on each other's nerves and get in each other's way often but, when they do finally set aside their differences and actually work together, they prove to be very formidable.

Feel free to contribute to the Character Sheet