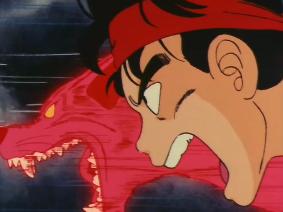 When a martial artist is extremely focused, an ethereal creature can be seen behind him, roaring, rearing, or screaming. Often used to show that the martial artist is mimicking something about the creature or (in more supernatural kung fu movies) channeling the trait from the creature. If taken less symbolically, the aura can accompany a powerful attack, be physically 'launched' at enemies to damage them, surround the person generating it and mimic their movements, or even act independently as an attack animal.

A subtrope of Power Glows. Actually-visible auras can overlap with Shaping Your Attacks.